With its iconic teal card, Starling is one of the most full-featured digital banks we’ve seen. Starling is one of the most full-featured digital banks we’ve seen. While it might not have the playfulness of a Monzo or the nice-to-have extras of a Revolut, it still sits at the top of its game for a stable, professional digital bank. Euro accounts are a particular advantage over its rivals, and a boon for anyone who regularly receives payments from elsewhere in Europe.

A plush folded greeting card with the embossed Starling Bank logo front and centre, inside the card is presented face-first in all its glory.

Starling’s decision to redesign its cards back in July 2018 has really paid off when it comes to arrival and unboxing.

By putting all the numbers on the back of its card, Starling doesn’t have to plaster them with ugly stickers or hide details behind paper flaps in order to stop Instagrammers accidentally sharing their bank details.

Starling’s app interface is clean and minimalist, some would say too much so.

Opening up the app’s home screen shows your balance, overdraft available and the ‘Pulse’—an interesting concept that shows today’s spend as a neon pie chart.

While attractive, it’s not particularly useful in practice. A single large payment (your rent, say) simply overwhelms the pie, on the other hand, if you haven’t spent anything, then a single small payment similarly takes over the whole chart and might seem larger than it actually is.

Why the transactions list, which is what most people will be looking for when they open their banking app, is hidden behind an upwards swipe (indicated with only a tiny ^ arrow) is beyond me.

Another minor niggle is that Starling’s settings are split between account settings (where you’ll find account info and PDF statements) in the top-right menu, while user settings (where you can change your password, etc) are behind the top-left menu.

However, beyond these UI niggles, the rest of the app is clean and full-featured.

Spending with Starling ticks all the boxes you’d expect:

While Starling’s payment backend is rock solid, its database of retailers and the categorisation of payments is hit or miss.

For instance, when I’m buying a meal in a local pub, I wouldn’t really count that as a ‘Holiday’ payment, like Starling seems determined to. My local Lidl also comes up in the transaction list as ‘Lon-Rosehill’, and many independent restaurants have no logo in this list.

Categorisation is just plain hard, while logos and store names are often kept up to date manually, by either employees or the goodwill of users.

However, these are spots where Starling’s execution is slightly below that of Monzo.

Easily splitting payments and requesting money is table stakes for digital banks these days, and Starling delivers with its ‘Settle Up’ service.

Forget calculators, sort codes and account numbers at the dinner table, anyone can pay into your account just by tapping the link you send, which has already calculated their portion of the meal.

Be warned, these payments are limited to a total of £250 per day, beyond that you’ll have to do it the “old fashioned way” with sort codes and account numbers.

Starling also led the way with ‘Nearby Payments’ which uses bluetooth to find your nearby friend’s Starling bank app, and initiate a payment without even sending a message.

Where Starling still has to catch up is in sending payments, here competitors like Monzo have created the ability not only to receive money via a link, but also to send money with a link.

The size of overdraft available to you varies based on your credit score, but the interest charged is the same 15% for everyone.

It should be noted that this interest rate is variable, so could increase or decrease, even on existing overdrafts.

15% compares favourably against other banks, running £500 into your overdraft for 30 days will cost you £5.81.

The second kind of borrowing Starling offers are loans, here it says the interest rate will always be lower than its overdraft interest.

Note the size of these loans available, interest rate and length available are all based on your credit score, you’ll also have to give Starling a reason for the loan you’re applying for, and there’s no guarantee you’ll be accepted.

Interestingly, Starling has recently started to promote loans in the transaction feed and in notifications when you make a large purchase, offering to help you “spread the cost”.

Starling is currently the best card to take abroad with you.

That’s for the simple reason that it has an unlimited fee-free allowance on cash withdrawals while you’re away.

While Monzo and Revolut both cap free ATM withdrawals at £200, then start to charge, Starling has no such limit.

All your cash withdrawals and card payments are also converted into local currencies according to the industry-leading Mastercard exchange rate.

That’s all to say that Starling is currently the industry-leader when it comes to taking a card abroad with you.

Starling offers a Euro account which is great for those who want to receive and hold Euros (say if you’re employer pays you in Euros, or you have a property abroad). Our review is in progress...

Starling offers a business account, our review is in progress... 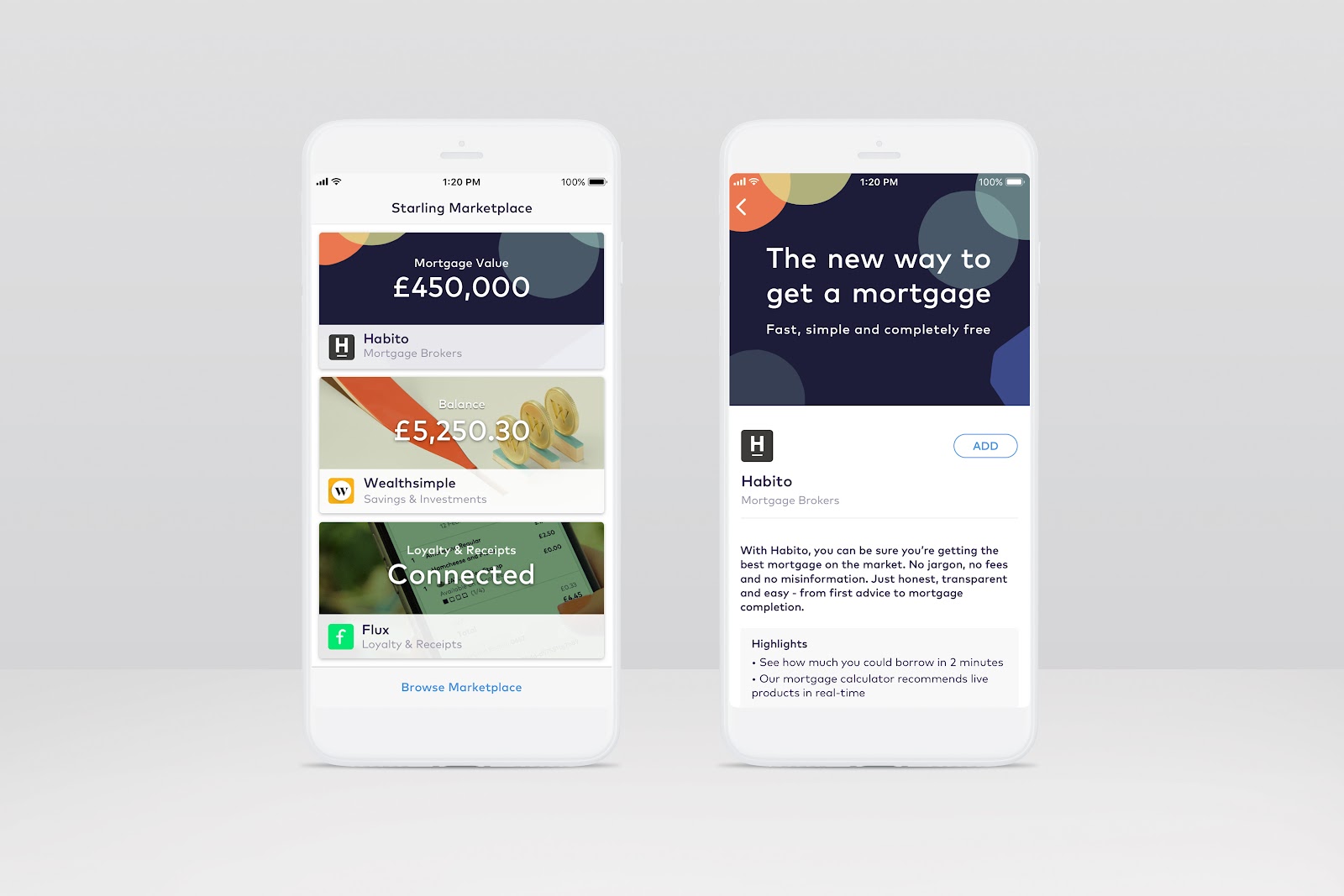 Similar to many other digital banks, while Starling launched its Marketplace with gusto and excitement back in April 2018, since then it’s been very “meh”.

While the bank claimed it was aiming for “25 partners by the end of 2018”, in fact the marketplace boasts just a paltry 9 today. Meanwhile, the Marketplace itself has been relegated to ‘Account Settings’ where you might accidentally click on it one day.

More fool you if you do, as most integrations are very basic, simply offering a slightly quicker way to sign up for insurance or view your Wealthify ISA pot.

This could change in the future as PISP (the next stage of Open Banking), lets you initiate payments with third-parties, not just view information.

However, for now, Starling’s Marketplace feels more Margate than Marrakesh.

You can create up to 10 Goals with their own savings targets, regular payments, Goal pictures and, unlike other digital banks, Starling counts cash stashed away in your goals as part of your balance, meaning you’ll still get 0.5% interest.

It should be noted that you will go overdrawn if you run out of money in your main account, but still have cash in a Goal.

One nice to have feature is called Round Up. Turn it on for a Goal and all your main account spending will be rounded up to the nearest £1 and the difference will be added to that Goal.

Rounding Up can be super-charged with 1x, 2x, 5x, and 10x multipliers which multiply the amount you save on each transaction.

If you’re looking for an ISA, LISA, fixed-term savings account or even just a higher-interest current account? You’ll have to look elsewhere.

I sent a few Sunday afternoon and middle-of-the-night customer service requests and usually got a response within a few minutes, or within the hour.

In my experience, Starling’s Customer Service is prompt, helpful and polite, however...

Customer Service is a difficult thing to measure, as a quick scan through TrustPilot reviews will attest.

Monzo is widely regarded as having the best Customer Service in the industry, an accolade earned over many separate industry surveys and reviews.

That’s not to say Starling’s Customer Service is bad, certainly it’s superior to a NatWest or HSBC, but it might not be quite as good as Monzo or First Direct.

The Grab Bag is stuff that doesn’t quite fit anywhere else in our review.

> Starling’s app performance has been sluggish recently, especially when launching from scratch. Although recent release notes have mentioned “performance improvements”, so fingers crossed.

> Starling’s iPad app is simply a scaled-up iPhone app, not that that’s a bad thing.

> A partnership with the Post Office means you can deposit cash at any of 11,500 branches.

> You can deposit Cheques, but they’ll need to be posted in (sorry, no cheque imaging).

> Turn your card off with the tap of a button in the app.

> If printed statements are important, you can create and print them directly from the app with a few taps. 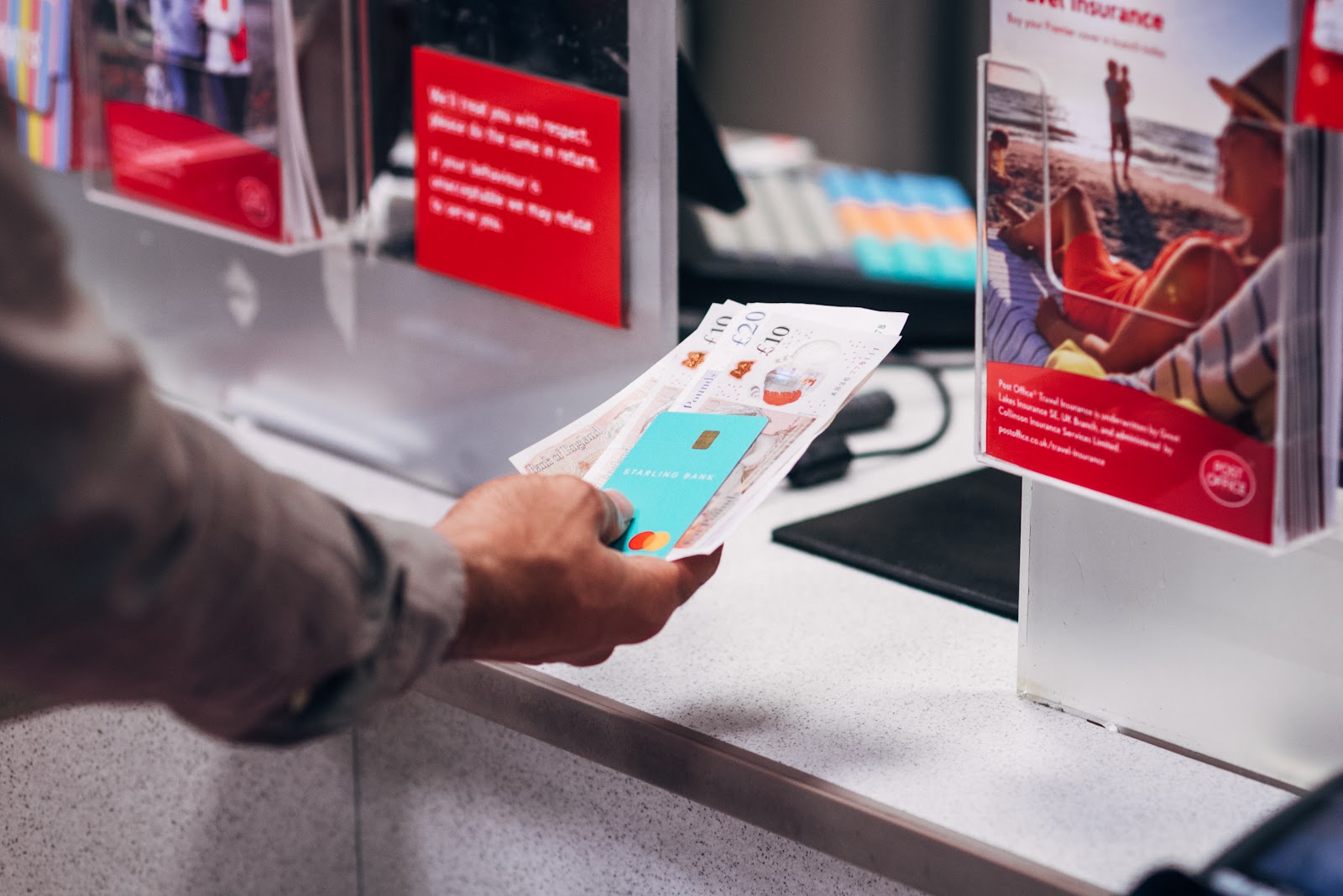 Starling is one of the most full-featured digital banks we’ve seen.

While it might not have the playfulness of a Monzo or the nice-to-have extras of a Revolut, it still sits at the top of its game for a stable, professional digital bank.

Euro accounts are a particular advantage over its rivals, and a boon for anyone who regularly receives payments from elsewhere in Europe.

While its Savings products are limited (0.5% interest is barely a start, but still better than Monzo), most people are used to shopping around for the best place to save and invest.